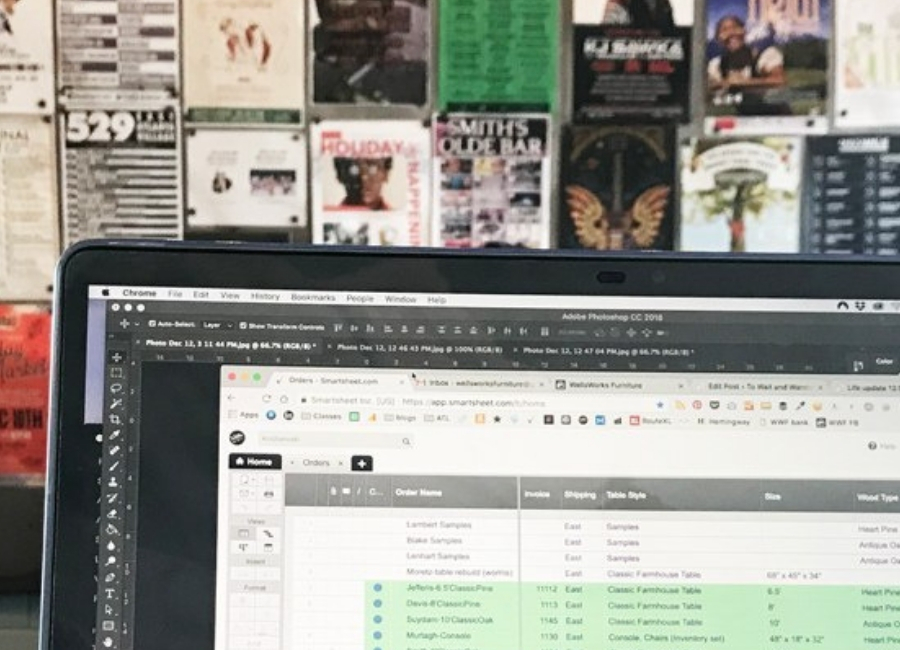 I’m sitting here working at Aurora Coffee in Little 5 Points sipping on an Arden’s Garden smoothie since Atlanta’s ‘snowpocalypse 2’ has left East Atlanta without wifi for the indefinite future.

I’m facing a wall covered floor to ceiling with band posters and tour schedules. Against it sit two guys in their mid-thirty having a pleasant conversation, fresh pressed coffee and a Bible between them. To my right, sits the coffeehouse owner and an APD officer discussing flights to Colorado. On my immediate left, a guy is face-timing a scantily clad lady as she lies in bed. To his left sit two guys in hipster attire of denim and presumably vegan leather. The denim dude dawning black prosthetic horns just above each temple and red heart sunglasses.

I love this weird little corner of the world.

Other than my immune system dipping out on me for a few weeks, life inside the perimeter has been going really well.

WellsWorks Furniture is going strong as Tyler and Hunter crank out tables for Christmas. I worked the Scott Antique Market October and November and possibly will again in January.

My roommates are the bee’s knees. Dana and I have been on several random adventures through the city, and we hope to bring Alisha along now that she’s through with school for the year. We stumbled into a random dance party in L5P the other night and met some vivacious and talented individuals. Before long they’re going to have me out on the dance floor. Problem is you need confidence and rhythm. (I have neither.)

I’ve only been here a few months and I’ve attended a Braves, Falcons, and Atlanta United game. I’ve seen Modest Mouse, Kesha, The XX, and Alt-J at the Roxy. Back to back shows at the Tab this weekend to see The Revivalists (again and again and again).

The past three months I’ve loved going to The Grove women’s nights at Passion with my friend Brittany. And tomorrow I plan to visit North Point for their NP nights, though Alpharetta might be too much of a drive each week.

Next week I head back south for Christmas with the grandparents and cousins before heading out on the Berryhill’s Christmas Vacation 2017. (2016, 2015, 2014)

I hope you all have been well and staying warm! Anything exciting going on during the holidays? I’d love to hear from you! You can follow along on all the fun on Instagram or Snapchat. And if you find yourself in my neck of the urban woods lets grab a drink!

Click Upside or use promo code KRISTEN76394 to get an extra 15¢/gal bonus the first time you make a purchase.

*This blog may contain affiliate links. All opinions on products, sponsored or otherwise, are solely mine.